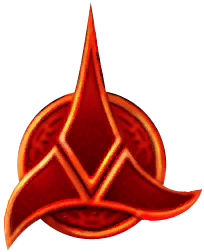 The Klingon Empire (also referred to as the Imperial Klingon Empire or Klingon Imperial Empire) was the official state of the Klingon people, founded in the 9th century by Kahless the Unforgettable, who first united the Klingon homeworld of Qo'noS. Since then the Klingon Empire expanded its sphere of influence by conquering numerous systems and incorporating them into the Empire.[1]

The Klingon Empire is one of the two factions you can choose in the game, composing as many species as the United Federation of Planets whom they are at war. The earliest you can get a Klingon Empire character is at Lt 5 if you've completed Stop the Signal mission or if you've reached Lt 6.

The Klingon Empire and its culture is warrior like, they have always seen war as the easiest solution to everything and only recur to exploration few times.

In-Game the Klingon Empire is currently made up of Klingons, Liberated Borg Klingon, Gorn, Letheans, Nausicaans, Orions, and Aliens.

Retrieved from "https://startrekonline.fandom.com/wiki/Klingon_Empire?oldid=8637"
Community content is available under CC-BY-SA unless otherwise noted.