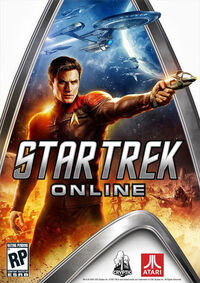 Star Trek Online (STO for short) is a massively multiplayer online role-playing game (MMORPG) developed for the Microsoft Windows platform, the first of its kind based on the popular space western series created by Gene Roddenberry. The game takes place in the year 2409, nearly thirty years after Star Trek Nemesis. [1]. Originally featuring 2 factions requiring a game purchase and recurring monthly fee at time of release, it has since expanded to 3 factions and is now one of the few rare MMO's which makes real money optional but not required to master and have the best items in game.

Several features of the game were released during the Star Trek convention. Among these was the revelation that each player would play with their own vessel, although they would not necessarily have the rank of captain. Crew for the ships would be divided into two with the bridge crew being likened to pets, i.e. upgradeable skills and so on, with the remainder of the crew being general, or "redcoats" as described by Jack Emmert. Holographic crewmembers could also serve as members of a crew, albeit with some limitations. An article in the October 2002 issue of the GameInformer magazine revealed that players' bridge crew, while being defeatable, will not die in the game although the "redcoat" crew can and will, necessitating replenishment at Starbases or friendly planets. The September 12 issue of "Ask Cindy" posted on the official website also indicated that bridge crews will be fully customizable with shirt color under player control. [2]

Gameplay style was also broached with general directions of combat, exploration and trade. Combat would involve slow-paced space combat and fast-paced land-based conflict. Exploration was discussed in view of explored and unexplored planets and systems. Players will choose, depending on the mission, which bridge crew and/or General crew to accompany them to the surface of planets, although some missions would involve only players. First contact with undiscovered species will also be featured and may influence the progress of the game. An example was given in that a newly discovered race may be recruited so one or two bridge crew members could be of that race. Trade would be conducted within the faction (Federation or Klingon Empire) with some trade channels between the two. These missions would be assigned from a Central Command.

Although explorable vessel interiors was one of the points mentioned in the convention, the current indication is that most vessel interiors would not be available at the launch of the game but will be the possible focus of an expansion, with executive producer Craig Zinkievich emphasizing the need to "get it right" before releasing the feature. Several areas previously mentioned as explorable, in the convention, include medical facilities and decks. The gameplay trailer also showed a battle scene on what appeared to be a Template:ShipClass bridge. [3] On November 11, Cryptic announced that the main bridge would be available at launch. [4] It was mentioned however that starship interiors were mainly for social interaction, showing what modifications were made, less as a game-play element. The announcements did not preclude, however, the possibility of selected vessel interiors used for away mission scenarios.

Several ships would only be fleet-accessible and can be constructed with the cooperative efforts of many players, then passed on to fleet members. Cooperative play was also touched on with the ability to form taskforces.

Customization is one of the hallmarks of Cryptic Studios and as such, Jack Black detailed the numerous ways in which players would be able to personalize the game. The characters, or in-game avatars would feature fully customizable features, with modifiable features such as body size and height. Players would also be able to create their own race or base a new race on mentioned, unseen-before races. Ships would also be customizable to an extent with the ability to change nacelles and stanchions or add decals. This customization would take place within the bounds of a class, with the overall design being immediately recognisable as a ship of a certain class. It has also been stated that captains will have a 'stable' of ships, with older vessels being kept unused rather than discarded as more advanced vessels become available.

The two playable factions have been announced; the Federation and the Klingon Empire (consisting of the Gorn, the Orion, and the Nausicaans). However, it has been implied that antagonists will include several Romulan factions, Species 8472 (Undine), and the Borg.

An ancient threat has also been mentioned, with players wondering if this means the return of the Hurgal or the Iconian civilization.

2007, October 10: Debt forces PE to stop developing and transfer Star Trek Online and all its assets to Perpetual LLC for liquidation, with proceeds going to the creditors of PE.

2008, January 14: Cryptic Studios acquires the intellectual property license and all content, except the game code, from Perpetual Entertainment after layoffs and loss of staff made it impossible to continue.

2010, January 28: Selected paying players of Closed Beta can now start to play the full game in a Head Start pre-release.

2010, Febraury 2: Star Trek Online is released for purchase in North America by Cryptic Studios, published by Atari and Namco Bandai.

2010, February 5: STO is released for purchase in Europe.

2010, February 11: STO is released for purchase in Australia.

2011, August 31: Cryptic announces they will be making Silver member free to play available, alongside Gold member subscription and lifetime subscription.

Retrieved from "https://startrekonline.fandom.com/wiki/Star_Trek_Online?oldid=9427"
Community content is available under CC-BY-SA unless otherwise noted.